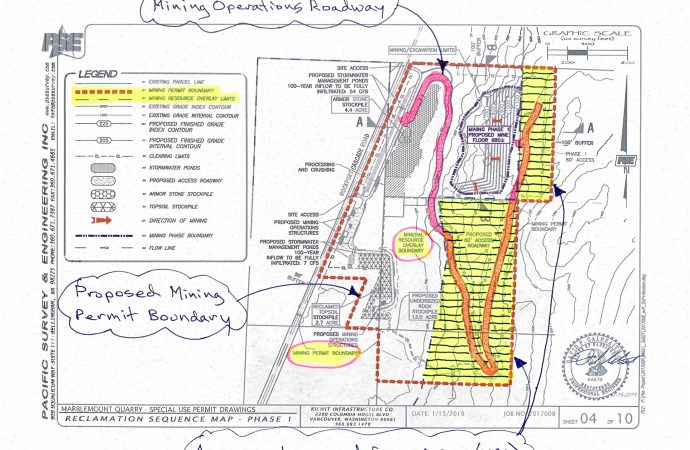 RE Sources for Sustainable Communities identifies many damaging impacts of Kiewit Infrastructure Company’s proposed quarry mine near Marblemount. Here is the text portion of its letter to Skagit County Planning and Development Services regarding Kiewit’s application for a special use permit to develop the quarry mine:

Thank you for taking the time to consider our comment on the Kiewit Infrastructure Marblemount Quarry that is being proposed in the heart of critical areas, national park, and wilderness lands that are not fully zoned for mining.

RE Sources for Sustainable Communities is a local organization in northwest Washington, founded in 1982. RE Sources works to build sustainable communities and protect the health of northwest Washington’s people and ecosystems through the application of science, education, advocacy, and action. Our North Sound Baykeeper program is dedicated to protecting and enhancing the marine and nearshore habitats of northern Puget Sound and the Georgia Strait. Our chief focus is on preventing pollution from entering the North Sound and Strait, while helping our local citizenry better understand the complex connections between prosperity, society, environmental health, and individual wellbeing.Our North Sound Baykeeper is the 43rd member of the Waterkeeper Alliance, with over 300 organizations in 34 countries around the world that promote fishable, swimmable, drinkable water. RE Sources has over 20,000 members in Whatcom, Skagit, and San Juan counties, and we submit these comments on their behalf.

Keiwit Infrastructure is requesting mining related permits on land that is not currently zoned for mining.In their application, they are proposing to build a large logging road (to be later used for mining) and to expand their mining operations into areas that are not within a mineral resource overlay (MRO). As dictated by the Growth Management Act, before these permits can even be considered it is necessary to first amend the Skagit County’s Comprehensive Plan to expand its MRO to cover all of the areas that are
within Keiwit’s application.

In addition, the proposed Marblemount Quarry has the potential for directly disturbing 120 acres of land,that is nestled within the scenic Skagit River valley that is the gateway to the North Cascades National Park. The disturbance goes well beyond these 120 acres, however, and is likely to have far reaching impacts on the local communities and wildlife for over a 100 years. We strongly feel that the complexity
of this project and potential to significantly impact the environment is not encapsulated by the SEPA checklist and limited environmental assessments performed thus far and we are requesting for an Environmental Impact Study (EIS). Here are some of our concerns that we feel warrant an EIS:

Impacts related to 260 daily vehicle trips of which 140 could be trucks:

● The carbon dioxide emitted from 140 trucks transporting rock to the headwaters of the Columbia and back is approximately 266 tons which is 12 times the amount an American citizen contributes in an entire year. This is a considerable greenhouse gas contribution and will accelerate global climate change.

● Non-exhaust particles coming largely from brake pad and tire wear can contribute more than 50% of the particulate matter produced by cars and trucks. Both brakes and tires contain toxic materials such as copper, zinc, and polycyclic aromatic hydrocarbons that can easily make theirway into the Skagit River. As the loaded trucks will be moving downhill, brake pad wear will be particularly heavy. Behavior and growth studies have shown that both copper and zinc are toxic to developing salmonids even in very small quantities.

● State Route 20, known as the North Cascades Highway, is a designated Washington State Scenic Byway; it connects people from the east and west sides of the Cascade mountain range. It is used for recreation, business, and the transportation of goods; it is a very popular bicycle route. Adding 260 more vehicles on this already busy highway will lead to more congestion and accidents and detract from its recreation potential.

● SR-20 follows the Skagit River for a large part of its path. This wild and scenic river is used by rafters, fishers, campers, and picnickers. Much of this recreation occurs between the highway and the river. Increasing truck traffic will negatively impact these river-related experiences.

● The notoriously tight corner at the junction of highway 530 and SR-20 that the loaded trucks will need to navigate will further exacerbate congestion and safety concerns.

Impacts to community and tribal members:

● People choose to live and visit this area because of its tranquility. The noise that will result from using explosives, crushing rocks, moving and transporting rocks will have significant impacts on the people living and visiting the area especially as mining activity is proposed to occur 12 hours a day, 6 days a week.

● People also are attracted to the area for its unparalleled beauty. The quarry will turn the now picturesque feature into an ugly scar that can be seen from many angles and from far away.

● Mining activity could dissuade visitors from coming to the area which could negatively impact the economy.

● Property values could further decline because of decreased aesthetics and increased noise and air pollution.

● As only 35 employees are expected to work at the mine; there will not be any significant economic gains.

● The mining site is located within the traditional lands of the federally recognized Upper Skagit Indian Tribe and could impact the Tribe’s treaty rights.

● Only rock of certain size and criteria can be used for the jetty work that is being described as the need for this quarry. Only 10-20% of the rock from this quarry is likely to actually make its way down to the Columbia river; this leaves 80-90% of the rock left as tailings or huge waste piles that will contaminate the site in perpetuity and jeopardize the aquifer that people rely on for clean drinking water. The rock will be contaminated with fossil fuels, explosives residue, and other materials such as naturally occurring asbestos that becomes toxic when exposed to the environment.

Impacts to environment and wildlife:

● Research suggests that noise can have wide ranging effects on wildlife including altering vocal behavior, reducing abundance, changes in vigilance and forage behaviors.

● Ground vibrations have been shown to decrease the survivorship of developing salmonid embryos.

● This mine could negatively impact Skagit River salmon populations including from toxic runoff,ground vibrations, water withdrawals and more. The Skagit River has all 5 Pacific salmon species and the Skagit River Chinook salmon population has been deemed particularly important for the endangered Southern Resident Killer Whale that depends on this fish as their main source of food. This could additionally negatively impact the local area with decreased recreational salmon fishing opportunities.

● Six fishers were released 5 months ago just south of the proposed quarry and the mining activity could adversely affect the success of the reintroduction of this endangered carnivore.

● Fugitive dust created from rock extraction, crushing, and road use is an air pollutant of concern.

The applicants plan to mitigate for fugitive dust by spraying water and/or magnesium chloride on the roads. The permit does not specify where this water will come from. The dustiest times will coincide with the driest times and water can be scarce in the summer; we do not want to take water from already compromised salmon habitat. Magnesium chloride is also not a good alternative as it can be damaging to vegetation.

● The impervious surface is predicted to be around 543,330 square feet which will increase the mobilization of sediment during rain events. This could lead to unstable slopes, rock fall, and increased turbidity to streams.

In addition to the environmental concerns we also wonder about the practicality of hauling large rocks 270 miles to their destination in the timeframe needed. It was noted that rock will be needed for the emergency repair on the Columbia jetty in 4 months. Is it realistic that this mine will be able to produce this product in such a short time frame? Is this really an emergency repair or is it rehabilitation? Are there closer mines available? Current research is also finding that soft or live shore armoring is often as effective or more effective than hard shore armoring and it has ecological benefits. As we move towards more ecological armoring techniques perhaps there will be a decreasing demand for this type of rock.

Due to the extensive list of potential impacts we strongly feel that an Environment Impact Study needs to be performed but only after the land has gone through the necessary Comprehensive Planning process.The large scope of this project has not gone through the adequate planning and environmental review. Because of these reasons we request that you deny this permit or suspend it until due diligence is performed.

Thank-you for your time in reading our letter and the many others that have been and will be sent regarding this controversial and impactful project.