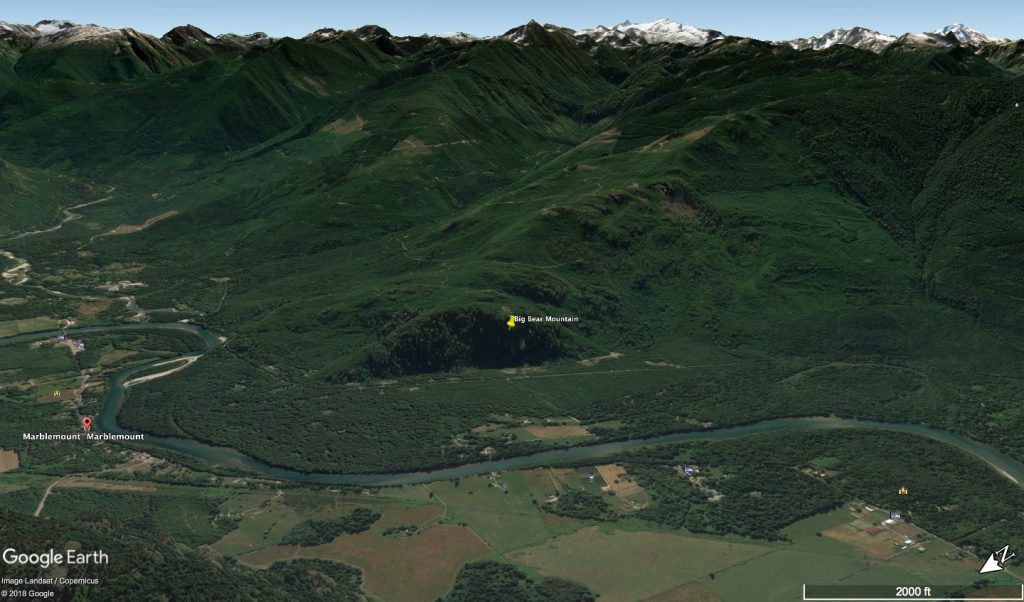 New Mining Proposed near Marblemount  (at the same location of the formerly proposed Kiewit operation).

Cunningham Crushing, Inc. applied for a surface mining permit from the WA Department of Natural Resources (DNR) to mine the same property on Rockport Cascade Road that was applied for last year by Kiewit Infrastructure through Skagit County Planning and Development. This new proposal still leaves us with significant concerns.

This proposal is to remove the entire 311-foot high talus formation of boulders with a big crane and other unspecified heavy mining equipment below the vertical 800 foot face of Big Bear Mountain. Large boulders of this material would be split with explosives or hydraulics into smaller pieces and be trucked out in “standard haul trucks’. The proposal estimates the amount of material in this large talus formation to be 1.2 million tons, that's 120,000 haul trucks loaded with 20,000 pounds of rock, every weekday, for twenty+ years!

This potential first phase reopening of a surface mine on this site has been repeatedly denied by DNR over the past twenty years for safety reasons due to the “jointed and fractured” condition of the rock wall. Despite the significant potential hazard of further talus removal as identified by DNR, and despite many of the same significant impacts as last year’s proposal which led Skagit County to determine that a full study of impacts (EIS) was needed, DNR has already made a Determination of Non-Significance (DNS). Concerned parties were successful in re-opening the comment period.

What can you do?